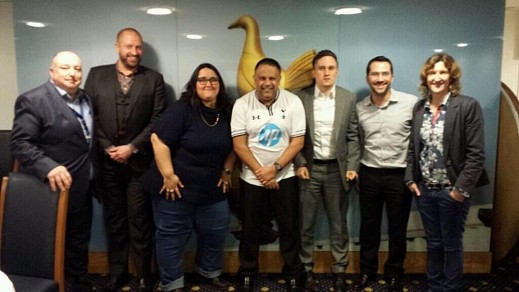 JW and the founding members of Proud Lilywhites

Simon Gray, Chris Paouros and JW at Call it Out for Pride in Football 2017

A rainbow above the new stadium for Jonathan

It’s unfathomable that we are writing this. We were supposed to talk to Jonathan after his week off and always looked forward to our phone calls and meetings because we knew we’d achieve something and it was always a joy to interact with him.

Like so many other people we are heartbroken that Jonathan is no longer with us. We’re struggling to articulate because any words we produce would never do him justice.

Kind, clever, funny and a fierce advocate for equality and inclusion, we first met Jonathan in February 2014 when he welcomed us to White Hart Lane and chaired the first ever Proud Lilywhites meeting. None of us knew what our group might become, but with Jonathan’s support and commitment to the cause we achieved so much in such a short space of time. We have no doubt that the reason the Proud Lilywhites is such a trailblazer in the LGBT+ fan group movement is down to Jonathan’s groundwork on our behalf with the Club.

We often get asked why there’s a need for an LGBT+ fan group at Spurs. Jonathan never asked, it was in his essence to be an ally and he genuinely cared. He once declared about discrimination: “I don’t get it, it’s about being human and nobody should be discriminated against”. Always a steady head, ready to listen and advise with a dry sense of humour, he wanted to work on educating fans rather than punish them. He believed in, and understood, social change and together we were making it, season by season we’d work together to push the boundaries a little more.

It’s striking, but not surprising, to see such an outpouring of grief at Jonathan’s loss; from individual fans, to fan groups, to football Clubs, the governing bodies and of course anyone who worked with him. This illustrates the measure of one of the world’s best humans. We’ve been contacted by many other LGBT+ fans who met Jonathan at various events over the years, all of them expressing their sadness, and sharing their gratitude for the work he did on helping us, and the wider LGBT+ fan movement.

Just the other day we were passing the new stadium and took a picture of a rainbow which appeared over it. Knowing we won’t get to be there with him is almost too hard to comprehend, but wherever he is now I hope he knows that we will continue our journey with him in our thoughts and hearts and will carry on with our important work for another reason now too—to honour his legacy.

Chris Paouros, Simon Gray and everyone at Proud Lilywhites

We are also proud to share other tributes from the Spurs and football community:

We want to remain independent, free to members and tackle discrimination in football. Find out how we use your money and donate by clicking here.